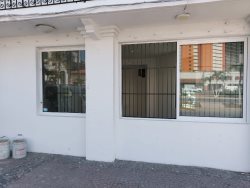 This helps to give it all the diversity of metropolitan areas in the United States or Canada, and so each of the city's many neighborhoods has its own characteristic flair. If you've been seriously considering a move to this magical seaside paradise lately, you've no doubt wondered which area of the city will offer you the experience you've come to enjoy.

The neighborhood you choose to settle into once you arrive in Puerto Vallarta will help determine your favorite venues, your first experiences with the area's natural riches, and even the people you'll meet, and each of these 5 colonias preferred by incoming long-term visitors has a distinct nature that makes it perfect for a given type of traveler. 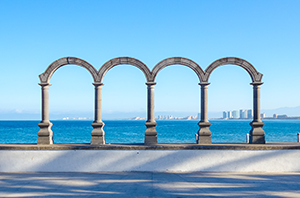 Downtown Puerto Vallarta, known far and wide as “El Centro,” had its explosion in growth as the prototypical landing zone for expats of all stripes in the 60s and 70s, including silver screen stars Elizabeth Taylor and Richard Burton. They and other pioneering visitors inhabited the area of this expansive colonia that later came to be known as “Gringo Gulch” for its popularity among foreigners curious about the rich culture and shimmering shores for which Puerto Vallarta has since become world-renowned.

Today, it is a furiously bustling nexus of local activity, serving as the city's cultural, political, and financial focal point. Newcomers to this area will find the absolute best of Puerto Vallarta consistently within reach. A multitude of dining, entertainment and shopping options dominate this area, and residents privileged to live in this area will find no shortage of activity. A large portion of the famous Los Muertos beach frames this section of the city, and visitors will surely find themselves delighted with the array of sights and sounds that greet them upon arrival into the heart of the city.

Centro locals are positioned within a few minutes' walking distance of the city's most popular attractions including the iconic Our Lady of Guadelupe church and Plaza Las Armas, the main town square and scene of an assortment of cultural events in the area. Indeed, making your home in Centro can present a hidden added benefit in the form of reduced or eliminated transportation costs.

From the celebrated Malecon that plays host to both an extensive network of venues and the inimitable aura of the Pacific coast, Centro Vallarta is the quintessential representation of what starry-eyed visitors imagine when they make the leap into long term residency. Fortunately for them, it certainly delivers as advertised on practically every level.

5 De Deciembre is bordered on the north by the Hotel Zone and to the south by downtown Puerto Vallarta, giving it an ideal placement for guests who want to be close to the action without paying a small premium for accommodations in Centro itself. The colonia rolls inland from the shores of Playa Camarones up into the cobblestone-paved streets leading up the hills into some of the most visually stunning vantage points in the city. Many homes in this section of the city even include private panoramic views of the Banderas Bay which have to be experienced to be truly appreciated.

5 De Deciembre is an eclectic blend of Puerto Vallarta locals and transplants from around Mexico as well as from abroad, giving it an exciting range of local flavor. From a number of street side taco stands that are the talk of the town even among resident experts to an assortment of bars and lounges along with small intimate eateries that serve delicious local takes on cuisines around the world, the neighborhood known as 5 De Deciembre is an outstanding destination for any newcomer arriving in the country hungry to experience a taste of “real Mexico”. 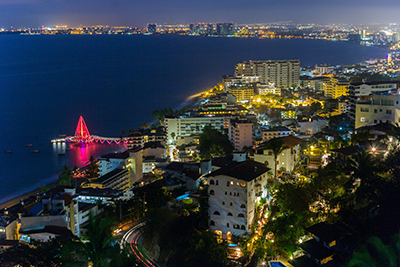 Known as the Romantic Zone en ingles, this aptly named area is the most enduring slice of the original Puerto Vallarta before its expansion into an international playground of comfort and culture. This neighborhood is unmistakably Mexican cobblestone streets trace the paths between charming residential architecture. Flowers, flags and other decor bloom forth from practically every balcony while below, a plethora of small family owned shops offering unique handmade crafts and souvenirs.

This area of the city is dominated by fiercely individualistic shops and cafes that offer visitors exclusive access to items they'd be hard pressed to find anywhere else. Surprisingly chic vintage shops and homey coffee shops that offer sojourning travelers fresh-brewed beans and WiFi access are a welcome sight for visitors to this polished yet unashamedly rustic slice of Puerto Vallarta. The neighborhood is also in close proximity the largest open-air markets in the city, the weekly Old Town Farmers' Market where shoppers can purchase incredibly fresh produce and handmade crafts.

Zona Romantica is one of the most desirable areas of the city for a newcomer to call home because of its singular blend of old school charm with the some of the latest in modern amenities. It's also a good choice for artistic types, as the neighborhood is home to a range of exhibition galleries spotlighting local talent as well as a thriving theatre specializing in cabana, jazz and drag shows. Perhaps more than any other neighborhood in the city, Zona Romantica exemplifies what separates Puerto Vallarta from other popular tourist destinations in the country through its ideal encapsulation of the authentic Mexican lifestyle. 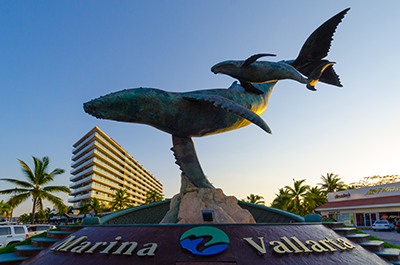 Taking its name from the cruise ship port that welcomes seafaring visitors into the city, Marina Vallarta is a fascinating case study of the variety within Puerto Vallarta's many neighborhoods. Standing stark against the rustic backdrop of nearby Pitillial, Marina Vallarta is one of the most posh and well-manicured areas of the city. The surrounding area is home to a host of tourist amenities from the local world-class golf course in the area that delivers an idyllic tropical twist on the favored weekend pastime to the friendly neighborhood Wal-Mart.

Another favorite amenity enjoyed by residents of the Marina Vallarta area is convenient beach access , as it is within walking distance of the Hotel Zone shores that separate the city's northern beaches from the Malecon area connecting Zona Romantica and Centro to the Mexican coast. Favored by high-end visitors because of the network of recently constructed condominium communities that populate the area as well as its proximity to the luxe shopping options provided by Galerias Vallarta, Marina Vallarta is a glimpse at Puerto Vallarta at its most indulgent.

Fluvial Vallarta is an up and coming destination for newcomers to the area that is rapidly gaining popularity in recent years. It's something of a hidden gem in the area, delivering many of the familiar amenities that incoming visitors will appreciate including major American chain stores such as Starbucks and Costco as well as supermarkets, schools and a major local movie theater.

Fluvial Vallarta typically has substantially lower rental and property values because of its location to the north of the city's center as well as its relatively recent development. The neighborhood as it exists today did not exist until well after the turn of the century, when increased interest in the Banderas Bay area demanded rapid residential expansion to accommodate the influx of migrants to Mexico.

As a result, even though it has seen an exponential rise in expat settlement within the last decade, the area has not commanded the name premium that established newcomer neighborhoods For families seeking a new background against which the best version of their futures can unfold, this neighborhood brings a hard to beat combination of amenities and value to the table.

As the name suggests, the section of the city known in English as “Friendly Vallarta” could hardly be more welcoming to the enchanted visitor looking into becoming a long term resident of the Puerto Vallarta area. With prices in the area only expected to rise as more newcomers flock to Mexico from the north, there has never been a better time to discover this newly thriving neighborhood.

Unlike many other Mexican destinations that have come to be popular among tourists, Puerto Vallarta delivers a textured tapestry of experience through its network of neighborhoods. With so many divergent experiences offered by the city's colonias, there's bound to be an area of the city populated with your kind of folks.

Tourists can receive the best exchange rate by converting their money to pesos...

The city has also becomes an excellent vacation destination for families as well.

The beaches of Puerto Vallarta are perhaps the city’s most celebrated asset...