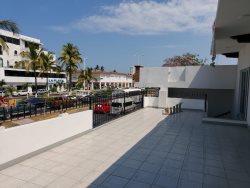 Getting Around Puerto Vallarta

One of the most immediate advantages that Puerto Vallarta presents to curious visitors is that the city is extraordinarily easy to navigate.

Not only does it enjoy a fairly significant landmark for directional orientation, being bordered on the west by our Earths largest body of water, but the carefully organized system of neighborhoods makes finding many local points of interest easy. The area also benefits from the recently constructed Francisco Medina Ascencio Boulevard, an expressway on the citys coast that can transport travelers clear across the city in half an hour or less.

Although the city is divided into many small colonias, many of Puerto Vallartas most popularly visited destinations are concentrated in a few of them. The most common method of transportation for incoming tourists is the extensive network of taxis that serve the city. Rather than using a distance meter as is common in other areas of the world, taxis in Puerto Vallarta work on the basis of pre-defined fare zones, with a ride from the airport in a yellow city cab to more central areas of the city costing anywhere from 70-120 pesos.

However, veteran visitors can also make use of the convenient local bus system, which runs frequently from 7am untll after midnight on most days and serves most areas of the city via direct routes at a fare cost of 8 pesos or less.

Where is the airport in Puerto Vallarta?

Travelers flying into the city by way of the local airport, known to airlines as PVR, will arrive on the outskirts of the city, in an area aptly called Aeropuerto. Although there are some residential neighborhoods such as Guadelupe Victoria bordering the airport district, most visitors will end up proceeding deeper into the city to explore the range of prominent local attractions or to reach their resort or hotel accommodations. The taxis directly in front of the airport are permitted to assess a significant premium to fares, while city cabs across the foot bridge over the expressway charge typical city rates.

Where is the Hotel Area?

The Hotel Area, or Zona Hotelera, is one of the first major colonias visitors will encounter on their way into downtown Puerto Vallarta after passing through the Marina area, where cruise ships visiting the city arrive into port. As the name suggests, the citys largest and most popular tourist accommodations are located here, along with an array of amenities short term visitors may require such as mobile phone stores, shopping centers, high profile restaurants and access to a nearby Wal-Mart. The hotel area is also home to some of the more popular beaches among visitors, including Playa Caracol and Playa de Camarones.

Where is Fluvial Vallarta?

Past the main part of the Hotel Area and slightly inland from the beachfront buzz rests one of the most dynamic areas of the city, Fluvial Vallarta. This area of the city is home to an excellent selection of restaurants, bars and clubs, and typically has a more local feel as area residents seek to avoid some of the worst of the high season rush from September through May. With a range of options spanning cuisines and atmospheres across the spectrum, Fluvial Vallarta is an excellent choice for a night out away from the bright lights of more tourist focused sections of the city.

Where is the Malecon?

Further along the main road through Puerto Vallarta, which traces the coast at its western edge through almost the full length of the city, is the local treasure known as the Malecon. This beautiful boardwalk, which was once open to motor vehicles, is a 12 block expanse of restaurants, bars, souvenir shops, street performers and other local flavor all arranged enticingly along the edge of the Pacific.

This famed walkway also hosts a special collection of sculptures and outdoor installations that celebrate the local history and culture, including the iconic El Caballito De Mar, a beloved seahorse sculpture that has become a recognized symbol of the city over the years. At the end of this spectacular promenade is Puerto Vallartas largest and most popular beach, Playa de Los Muertos, along with even more inviting dining and entertainment options beyond those of the Malecon itself.

Where is downtown Puerto Vallarta?

The Malecon effectively serves as the entry into the nexus of the city, and although Centro Vallarta could refer to a relatively wide swath of this seaside destination, the true downtown area of the city is referred to as Centro. Home to Puerto Vallartas most frequently visited establishments, this area has entertainment options for the entire family any time of day or night from open-air exhibitions to swank piano bars.

Centro is also home to the La Iglesia de Nuestra Senora de Guadalupe, a grand celebration of Mexicos deep roots in Catholicism. This historic church is perhaps most identifiable by its distinct system of bells, which chorus proudly to mark the hour as well as on special occasions, along with its unique tower crown, depicting angels holding a crown aloft to highlight this spiritual center of the city.

Where is the Romantic Zone?

The Romantic Zone, known affectionately to locals as Old Town, is a living tribute to the historical origins of Puerto Vallarta. Located on the south side of Centro, this intimate area of the city is prized for its network of local restaurants and shops which are traditionally run by natives or longtime residents. This area is also home to the famous Farmers Market, where visitors can purchase some of the freshest and most delicious seafood and organic produce they will ever lay hands upon.

Where is the Puerto Vallarta Zoo?

One of the southernmost major points of interest in the Puerto Vallarta metropolitan area, Zoolgico de Vallarta, is located between the city proper and the beaches of nearby Mismaloya, in a lush tropical jungle located on the edge of city limits. This rich, verdant backdrop is the ideal setting for discovering the wonders of Mexican wildlife, with many creatures exhibited in their natural habitat thanks to the relatively pristine condition of the local jungle.

Visitors will likely be pleasantly surprised at the level of interaction they can have with their favorite animals, as many ae available for petting as well as feeding. Nestled in a valley within a local mountain range, the Puerto Vallarta Zoo makes an unforgettable and educational day trip and is a cant miss stop for any lover of nature.

The diverse nature of Puerto Vallarta means theres always something interesting to do if you know how to get around. While many first time visitors limit themselves to the beaches of the city or even fail to leave the resort, these tourists do themselves a real disservice by skipping over the range of experiences that the area has to offer.
Back To Topics